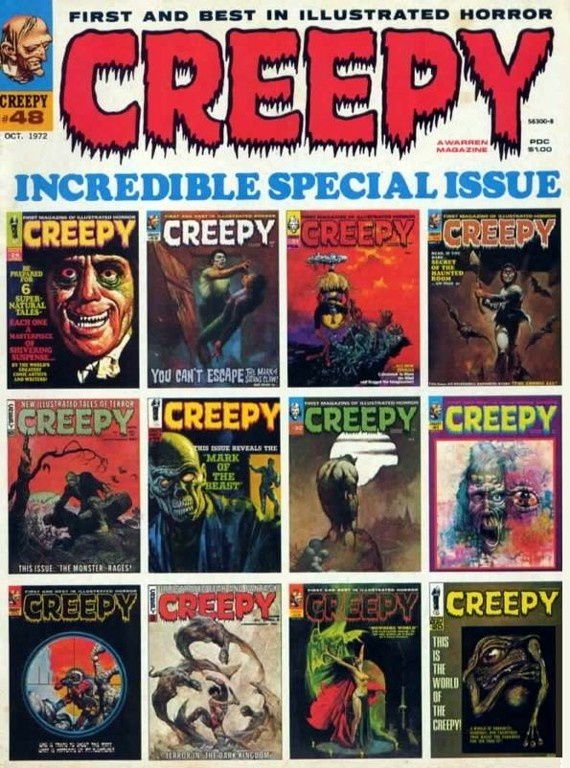 Stories in this Annual reprint issue include: The Coffin of Dracula by Archie Goodwin and Reed Crandall; The Castle on the Moor! by Johnny Craig; Moon City! by Larry Englehart and Al McWilliams; Swamped! by Archie Goodwin and Angelo Torres; Thumbs Down by Anne T. Murphy and Al Williamson; The Cosmic All by Wally Wood; Drink Deep! by Otto Binder and John Severin; and The Adventure of the German Student! by Archie Goodwin and Jerry Grandenetti. Cover montage reprints 12 covers from different eras of the magazine. Back cover by Jack Davis is reprinted from Creepy #1. Stories in this issue include: The Land of Bone by Buddy Saunders (owner of Lone Star Comics) and Esteban Maroto; Mark of the Phoenix by T. Casey Brennan and Reed Crandall; The Law and Disorder by Dennis Junot and Luis Garcia; The Eternity Curse by John Thraxis and Martin Salvador; Point of View by Steve Skeates and Luis Dominguez; This Burden-This Responsibility! by Steve Skeates and Jerry Grandenetti; Futurization Computation! by Bill DuBay; and The Beginning! by Steve Skeates and Tom Sutton. Includes Reed Crandall profile. Cover art by Ron Cobb (miscredited to Manuel Sanjulian). Stories in this issue include: Cross of Blood by Doug Moench and Esteban Maroto; Behold the Cybernite! by Rich Margopoulos (making his professional debut) and Tom Sutton; On the Ninth Day of Satan by Kevin Pagan and Felix Mas; I, Invisible by Jose Bea; Spellbound by Lynn Marron and Luis Garcia; Night Watch by Ed Fedory and Jorge Galvez; and Friedheim the Magnificent by Greg Potter and Richard Corben. Includes book review of famous nonfiction work All in Color for a Dime. Cover art by Manuel Sanjulian.